When Will Schusterick first played the USDGC in 2007 at age 15, it’s safe to say he had no idea of the success that he would later find in Rock Hill, S.C.
“I was just happy to play in the tournament … It was just really special to play in the event and be with the pros I looked up to. It was just above me at that point,” said Schusterick. 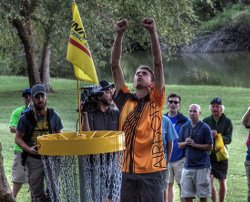 Schusterick, still developing his game back then, finished a distant 93rd in 2007. But the course suited him. The next two Championships he improved to 20th followed by 2010 when he broke through with his first US title. Some called it a fluke, but Schusterick proved his Winthrop prowess with US titles again in 2012 and 2014. Plus, he came within a few holes of winning it in 2013 as well.

Now at 23 years old, he has already built a strong USDGC legacy. And, what’s even more impressive is that he’s got so many more years to add to it.
Currently, he stands tied for second with disc golf great Barry Schultz for the most USDGC victories at three. He only needs two more to catch Ken Climo’s five – a record which once seemed much further away.
However, Schusterick doesn’t spend much time evaluating his place in disc golf history. He says his legacy is still a work in progress with many years ahead of him to define it. Though he said he’s flattered to be associated with Schultz, the main thing he’s focused on now is improving as a player.

Last year (prior to the USDGC), was an uncharacteristically ‘off’ year for Schusterick. Though he took two top four National Tour finishes, the rest of his NT’s were 8th place or worse. For Majors, where you expect to find him vying for the title, Schusterick finished 13th at the Japan Open and 10th at the Pro Worlds. His best major was a 6th place finish for the European Masters. 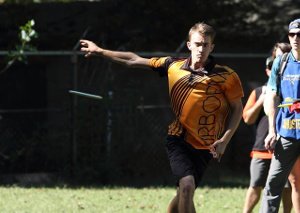 What was off? Schusterick said it was his tempo and he wasn’t as relaxed or focused as he’d like to be.
Even with that, Schusterick said his expectations leading into last year’s USDGC were no lower than usual. Once again he found his comfort zone and his stride at Winthrop, staying in the hunt to eventually edge out Johne McCray and reigning World Champ Paul McBeth in the first USDGC playoff since Schultz and Climo’s battle in 2003.

This year he’s not lighting the tour on fire, but he says he’s playing more consistent and it does show. He placed well in the two European Majors (2nd at the Scandinavian Open and 4th at the European Open), plus he’s placed in the top six at five NT events. At Worlds, Schusterick held the lead for two days, but couldn’t keep up with a white-hot McBeth. Still, Schusterick made the Final 9 and finished a strong third place.

But just like Worlds has been McBeth’s domain, in recent years the USDGC has had Will Schusterick’s name all over it.
When asked if having three US titles changes the way he views the event, he replied, “Not really. It makes it feel more close to the heart … I still view the event as really special and I think I’ll always view it like that,” said Schusterick.

Combine Schusterick’s years of Winthrop success, feeling better about his game, and feeling great health wise – he may be poised to adding another notch to his legacy with a fourth US title.