An expanded classroom curriculum and a more user friendly version of the popular Skill Shot competition are two big things on the horizon for EDGE in 2015.

More than 1,500 schools nationwide participate in the EDGE program. And now with the upcoming release of the third edition text that features new lesson plans with accompanying activities, EDGE officials are hoping to reach even more schools.

Curriculum coordinator Jon Lyksett said the new lesson book will also include updated statistics on health and fitness, new disc golf illustrations, and a new section highlighting values that teaches students various virtues of life on and off the disc golf course. 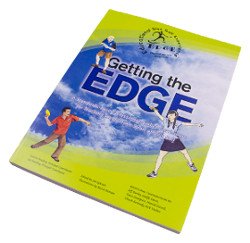 Its anticipated debut will be in Seattle at the national physical education conference led by SHAPE America next March.

Every year at the USDGC, area students are brought to the EDGE Village to learn disc golf fundamentals and spectating etiquette by watching competitors on nearby holes.

Also being revised is EDGE’s Skill Shot competition, which teachers use to test students’ disc golf skills incrementally. Accuracy and distance are tested with shots ranging from a 25 foot putt to lengthier approaches and drives.

A version of it has also been used as a field event at the pro and amateur World Championships.

Lyksett said they’re in the process of making it easier for organizers to set it up as well as make it more attractive for larger groups to experience. And they’re hoping to unveil it next year as well.