90 feet was the closest anyone was to Simon Lizotte’s furthest throw during the US Distance Competition on Tuesday.

Lizotte of Germany heaved a 681-foot throw to win the competition for the second year in a row. His winning throw was 33 feet longer than his winning throw last year.
Nearest to him was defending USDGC Champ Steve Brinster, who threw 591 feet, followed by Garrett Gurthie and Jeremy Koling, who both threw 582 feet.

Lizotte, Brinster, Gurthie, and Koling are all now headed to the Big Arm, Big Heart distance showcase after the awards ceremony on Saturday.
Each of these four finalists will get 12 discs to wow the crowd. Fans can purchase those throws at the USDGC Pro Shop for a $20 donation to help end breast cancer via Throw Pink. If the disc lands over the lake, the donator gets to keep the disc, which will be autographed by the player.

The four finalists will also be joined by a Bonus 5th Player, who will be determined by the highest bidder. All proceeds from Big Arm, Big Heart go toward a great cause. 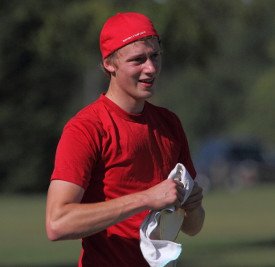 If any of these five throwers land inside the one pink-banded DISCatcher Pro target then $25,000 will go toward ending breast cancer.