After flipping a switch to overdrive midway through the 2015 PDGA World Championships, Paul McBeth cruised to his fourth consecutive world title. McBeth, or McBeast as he is known, now gets another crack at completing disc golf’s Grand Slam. One of the few majors that he hasn’t claimed, the USDGC, is all that stands in his way of making history. 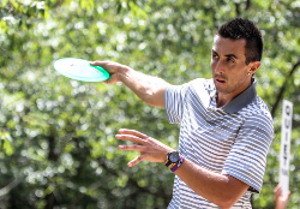 McBeth found himself in a similar position only two years ago when he won all of the majors leading up to the USDGC. Although he broke the Winthrop Gold Course record with a 52 (-15) during the final round, it wasn’t enough after three un-McBeast-like rounds, and he was only able to tie for 8th place.

The sporting world was abuzz during the summer as Jordan Spieth charged toward a Grand Slam for traditional golf. He didn’t complete his quest, but his run was still magnificent.

Currently sitting on four major victories this year, McBeth is positioned to capture disc golf’s Grand Slam. To complete this unprecedented feat, McBeth will have to get past defending and 3-time US Champion Will Schusterick and the rest of the tough Open Flight field.