Not many people know Nate Sexton better than his caddy. And I’m sure his caddy, Jay Sexton (his father), would agree.

Now in their third USDGC, Nate and Jay’s partnership has become a regular thing.

“It’s fun. Now that it has become a tradition, it’s cool that he’s able to be there,” said Nate, 30, who is tied for this year’s lead after two rounds.

And, it has also become a good opportunity for the two to spend some time together, which has gotten less frequent since Nate moved away from Oregon to Chapel Hill, N.C., about a year and a half ago.

As an experienced USDGC caddy, Jay, 56, who lives in Philomath, OR, has learned to give timely advice while not being pushy, which can be a tricky thing for any parent.

A good example of this occurred on Wednesday: Nate was throwing frequent sidearms, but felt when he threw backhand it wasn’t firing on all cylinders. So, his dad suggested keeping his backhand motion loose by occasionally snapping a towel.

Did his caddy advice work? “I think so. My backhands later in the round were better than earlier in the round. I threw backhand on (hole) 15 and on 18 and they were more to my liking,” said Nate.

Jay knows a thing or two about disc golf. He actually got into disc golf at the same time Nate did many years ago. The whole Sexton family did. Jay said they’d play object rounds during camping trips and later discovered a course with baskets in Corvallis, OR. 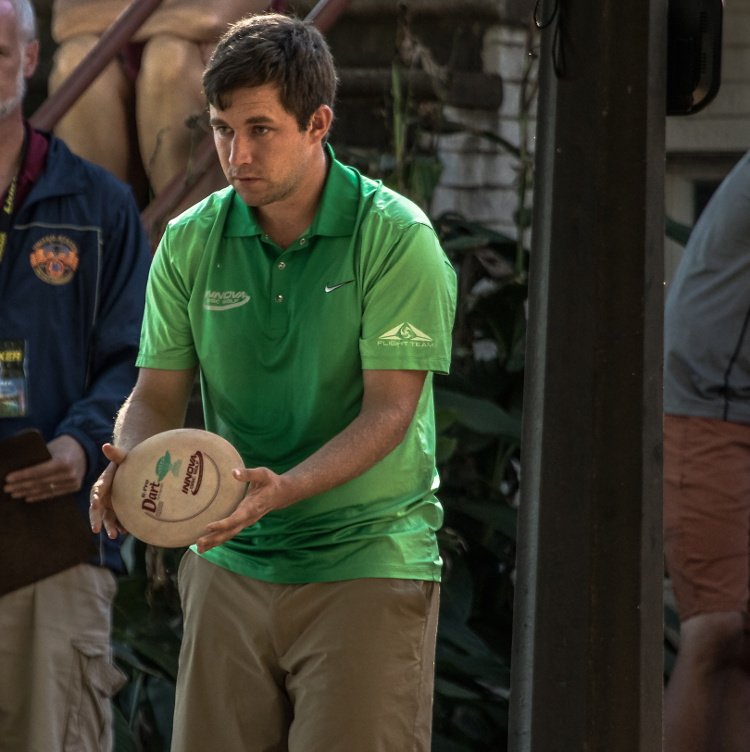 Now, Jay plays the occasional tournament in the pro grandmaster division and sometimes caddies for his wife.

Joking about how he became his son’s caddy, Jay said, “Well, it was a pretty involved interview process.”

Jay’s participation actually happened after years of Nate describing how cool the USDGC was and Jay reaching a point in his life when he had more time away from work.

Plus, Nate’s wife Brianna, reminded Jay how much Nate appreciates him at his events. So Jay thought, “You know, that would be nice to support him like that.”

This year, with Nate tied for the USDGC lead after two rounds, the two men must be having one of their more memorable USDGC experiences as they collaborate during the round and review they day's holes afterward. Their collaboration is definitely working so far. Nate has tied his personal Winthrop best of 59 (-8) for the first two rounds.

Jay says he enjoys his close view of his son competing at the highest level, but he still gets a little anxious for his son.

“You can’t throw it for him, and you just thank God that you can’t because I would do a much worse job,” said Jay with a chuckle.