In a nearly overwhelming turnout at the Throw Pink Event in Rock Hill on Saturday, 61 women and girls shared in the joy of disc golf at Fewell Park while helping put an end to breast cancer.

Many of the ladies there were playing disc golf for the first time during the three-hour event, which started with fun and friendly skills clinics and games, and finished will 12 holes of disc golf on special Throw Pink targets.

Throw Pink is a series of disc golf events that take place from March to October with the goal of raising money for breast cancer charities, while encouraging women and girls to learn and play disc golf.

Luanne Gardner of Rock Hill was seen enjoying herself with a group of other new disc golfers. When asked if she’d played much before that morning, she replied, “Never. This is the fifth (total) time I’ve thrown.”
She said she attended Saturday because of the good cause and to learn something new. 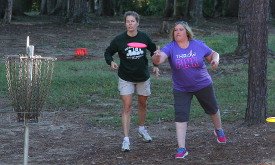 The $10 event fee included a Throw Pink t-shirt, the round of disc golf, a ticket to the final round of the USDGC, and a donation to help end breast cancer.

Sara Lamberson drove from Columbia, S.C., to help instruct the new players with putting. Playing 25 tournaments this year, Lamberson has really fallen in love with the sport and she believes more women and girls can too.
“Basically, if you like being outdoors and you like being active, then disc golf is for you,” said Lamberson.

It can be tough to attract new females to the sport when few already play, but events like Throw Pink can help change that – all while raising money for breast cancer charities.

Five-time World Champ Juliana Korver, who was in town for the USDGC, came to support the event and its worthy cause. She said disc golf has had a significant impact on her life, connecting her to many friends and valuable experiences. She said it would be great if these women at Throw Pink can someday experience just a fraction of the joy she’s experienced from the game.

That could be the case for Betsy Lytle and her daughter Audrey, 12. Betsy Lytle thought the Throw Pink event would be a good introduction to disc golf for her and her daughter.
“For us being beginners, it’s less intimidating to come to events specific to women. And, to help raise money for a good cause – it’s a win, win,” said Lytle, who planned on attending the USDGC afterward.

Already playing soccer, Audrey Lytle seemed pretty optimistic about disc golf.
“I like it because it’s relaxing, but it also has a competitive side to it,” said Audrey.