Final Round Recap: McBeth is a 2-Time US Champ 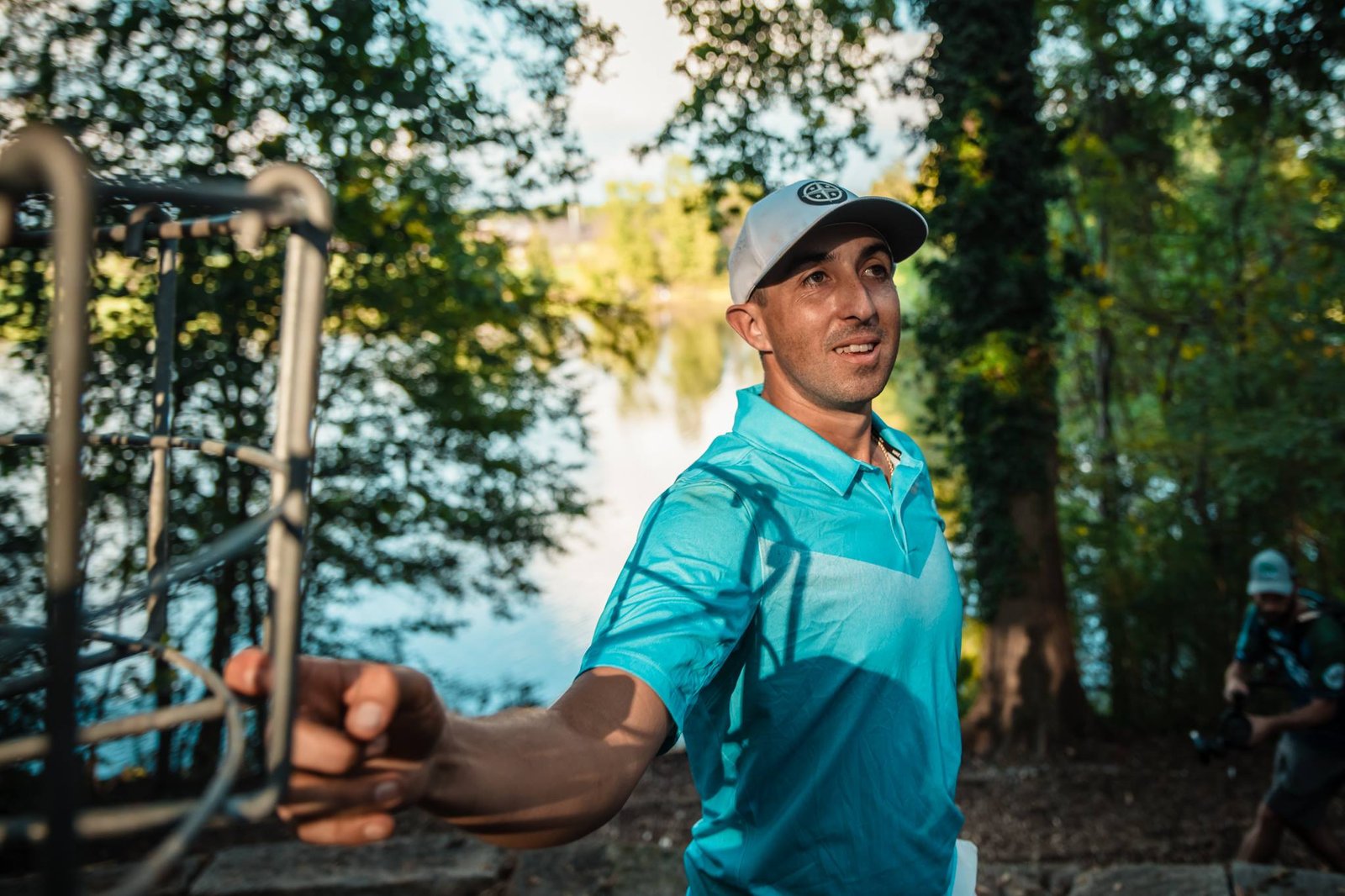 Fending off a hard charging lead card that included Nate Sexton, Kevin Jones and James Conrad; Paul McBeth (-34) outlasted them all and claimed his second U.S. title Saturday during the USDGC.

The final round and much of the 2018 USDGC took place amid unseasonably warm conditions, though the temperature decreased by a few degrees for a high of 87 on Saturday.

Though there were several nice runs from players like Ricky Wysocki (5th -27), Eagle McMahon (6th -26), and others in the second and third cards, the race for the title was primarily on Saturday’s lead card. Though McBeth never lost the lead during the final round (or the entire event for that matter), each member of the lead card got within striking distance.

McBeth came through big when needed

Going into the round with a five-stroke lead, McBeth knew he had to come up with something special to get the win. And, though his round of -5 wasn’t pristine, he came up with big plays when he needed it.

One of the most pivotal moments of the final round was after James Conrad tied Paul McBeth on Hole 13, which was the first time anyone had caught him during the event). McBeth then made three straight birdies on holes 14 through 16, taking the lead by three strokes going into Hole 17.

Three strokes is still a small margin, though, when you step up to the unpredictable Hole 17 with the island green.

On McBeth’s tee shot he clipped a tree branch not far off the tee and landed OB, much to the shock of the entire gallery surrounding the hole. McBeth then stopped any thought of a Hole 17 meltdown when he then switched to a forehand driver instead of another backhand putter and landed safely. He hit his putt for bogey and went to the final hole still with his lead intact, though it was now only 1 stroke. 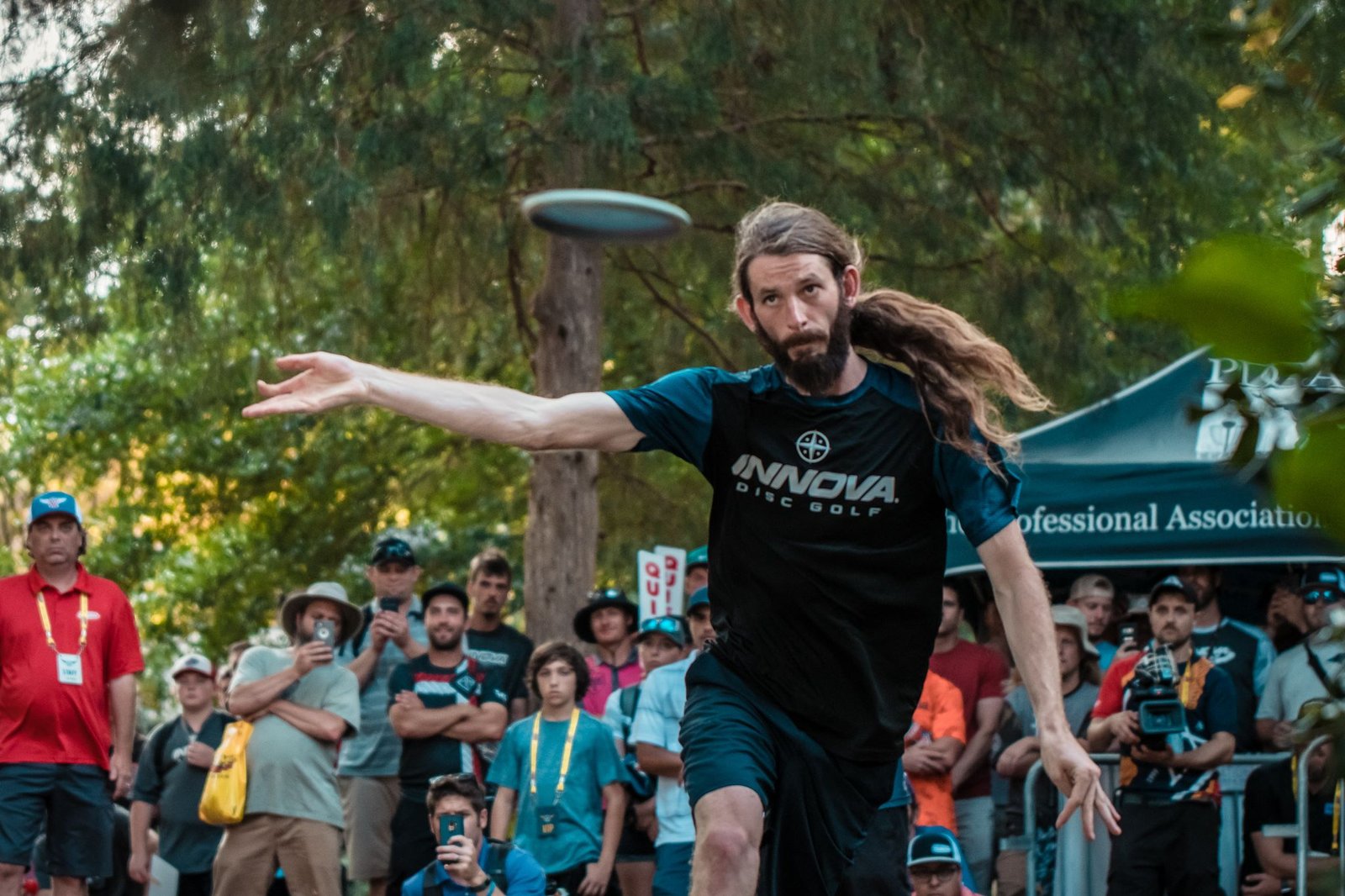 After birdies on the first two holes, including a sweet 45-foot jump putt for birdie, Conrad cooled down on holes 3 and 4 making a par and a bogey on those holes respectively and found himself down by six strokes. However he didn’t back down. After Hole 4 he birdied 4 of the next 6 holes including Hole 8 where he made an incredible backhand roller second shot that made its final turn just in time to nestle at the bottom of the sloped green. He hit that birdie then bombed his drive on Hole 10, leading to an eagle. After that he was only down by two strokes.

Conrad kept charging. When he birdied Hole 13 and McBeth missed his 40-foot birdie, things were all tied. However, as McBeth was making birdies on holes 14 through 16, Conrad could only make par. By Hole 17, McBeth was up by three strokes. But after seeing McBeth struggle with his backhand putter tee shot, Conrad knew he had to make a move. Using his putter, Conrad then stepped up and laced it right to the basket, nearly acing it.

(James Conrad talks about tying up McBeth after Hole 13 and his Hole 17 tee shot.)

Kevin Jones had a chance too

Kevin Jones had a great start, birdying six of the first seven holes including Hole 5. In one of his big round moments, he got within one stroke of McBeth after he made birdie on Hole 5 while McBeth found the water on his approach over the lake and ended up with a double bogey. Jones then missed a putt near the circle outside the beach green of Hole 6 to fall two back of McBeth. He stayed that way until Hole 9 when Jones failed to save his par while McBeth gained two strokes with a birdie.

Jones then worked his way back to within a stroke of McBeth when he made birdie on Hole 12 after two effortless long drives and a solid putt as McBeth made bogey. While McBeth was making his charge on holes 14 through 16, Jones nearly kept the pace. He made birdie on Hole 15 after a smooth drive, but couldn’t capitalize on his 45-footer for birdie that hit the band on Hole 14 and when his birdie putt on Hole 16 failed to settle in the basket.

By Hole 17, he was three strokes behind McBeth like Conrad. Jones sent his forehand tee shot to the right side of the green. Then, when he went for his birdie, it sailed too high over the basket and over the hay bales into OB. After finishing the hole with a double bogey his chances of a US title were pretty much over. His third-place finish was his best at the USDGC.

(Kevin Jones talks about the experience of the final round lead card and more).

Down by eight strokes at the start of the round, then down by 10 strokes after Hole 4, Defending Champ Nate Sexton did a great job of clawing his way back into contention. After Hole 13, he’d gotten within 3 strokes of the lead. However after a bogey on Hole 15, his only for the round, a repeat US title looked to be out of reach. Sexton ended up shooting the hot round of the lead card with a -8, and placed at solid 4th.

Just one hole to go:

With McBeth managing to save his bogey on Hole 17 and Conrad making birdie to get within 1 stroke, it all came down to the last hole. Conrad laced a big drive up the fairway but landed close the mando tree halfway up the hole. McBeth chose midrange off the tee landing in the fairway’s center then opted for his Teebird3 for his second, releasing it clean. Feeling good about the shot, but still anxious for the spotter’s call, he showed the most excitement of the round when he saw the green flag followed by the gallery’s approval.

Conrad, needing a birdie to put the pressure on, threw his stable midrange, but it clipped a tree branch landing short of the green. With everyone then seeing that McBeth was parked for a sure birdie it was essentially over and McBeth became a two-time US Champ and Conrad got runner up.

(McBeth talks about that pivotal approach shot on Hole 18 and more here:)