How the Winthrop Gold Course Came to Be

The first time Harold Duvall saw the Winthrop University Recreation Area in 1988 he knew it would be the perfect place for Championship disc golf.

“What it presented was the most beautiful public space in Rock Hill and a unique venue to have championship disc golf that was viewable by a gallery,” said Duvall. There were plenty of big disc golf events happening at the time, but few were situated in a setting that would accommodate spectators, so Duvall knew he had something when he found Winthrop.

At the time, not much was going on in the way of disc golf in South Carolina, according to Duvall, who had recently moved there from California. When it came to modern day disc golf courses in the state, Earlewood Park in Columbia, (established in 1989), was pretty much it, he said. It took a few years to foster a relationship with Winthrop University, key in that was arranging targets from two seldom used South Carolina state park courses to be repurposed at Fewell Park in Rock Hill and at Winthrop. Duvall also sweetened the deal by having volunteers install them.

When Duvall got approval for the course, he didn’t take the design lightly. He said it took hundreds of hours of course design deliberation with both the spectator and the player in mind before the Winthrop Lakefront Course was opened in 1992.

From the gallery’s point of view, Duvall wanted them to see the players at their most spectacular, so he created holes where they’d witness long, incredible shots. At the same time, he designed the course so that those throwing the shots would feel equal amounts of anxiety and excitement each time they approached the tee.

One of the property’s great assets, besides it’s beauty and diverse terrain, was the College Lake loop road that surrounded much of the course. Being near most of the holes, it was ideal for spectating without crowding the players – something that was hard to avoid at any other venue hosting large disc golf events at the time. When he was finished, he had a course that the students of Winthrop University could enjoy and something that could be used for championship events. Much of it still remains today in the modern-day version of the Lakefront course (a shorter version of the Gold course that mainly plays around the lake).

Many may not realize it, but back then Hole 1 didn’t begin near the Winthrop Shack. Actually, the first hole began near the current player parking lot and ended about 290-feet away near the green of the current Gold Hole 4. However, there was no signature ring of Leland cypress trees, just a few short cedar trees, said Duvall, adding that those were later planted by the disc golf community as well as many other trees and vegetation throughout the years.

The next hole then moved back toward College Lake Road, followed by two holes along the Winthrop Lake (what is now Gold Hole 5). The course then flowed around the lake and finished at where Gold 4 now is located.

In 1997, the Pro World Championships came to Charlotte, and Winthrop was used for the finals. Not only was the Lakefront course used, but a temporary 18-hole course was installed on the nearby Winthrop Golf Course that was called Eagles Landing. Duvall said the Lakefront course used for Worlds was quite similar to the course that opened in 1992, though the numbering may have changed.

For the first USDGC, the course saw some serious changes and was now referred to as the Winthrop University Gold Course. Hole 1 was repositioned to its current location by the Winthrop Shack and the course now flowed similar to modern day, though several of the holes and numbering would be revised through the years.

(Here’s the course map from the 1999 USDGC Program)

One of the biggest design risks was to take two of the Lakefront course’s greatest holes and try to create something truly special. 1999’s Hole 8 combined a signature par 4 and an equally beloved Par 3 into the Gold Course’s first Par 5.

This hole continues to be 5-time US Champ Ken Climo’s favorite USDGC hole. And he really liked the original tee pad. Especially for right-handers, it was a turnover shot that made you think twice, he said. “You were blind to the lake,” said Climo.

Other noticeable changes for 1999, were the addition of three holes beyond the Winthrop baseball field and what was then a nursery. (At the time they were numbered 12, 13, and 14.)

1999 Hole 12 (par 4) and Hole 13 (par 5) along with other multiple shot holes was a new concept to disc golf at the time. The USDGC made multiple shot holes, par 4’s and par 5’s, the rule more than the exception and helped move the sport away from the drive and putt mentality of course design, according to Duvall.

Rick Rothstein, who covered many USDGC’s for his Disc Golf World News Magazine was a fan of the design. With most other courses at the time, you just threw as far as you could, but at Winthrop you had to throw controlled shots to set you up for the green, said Rothstein.

Dr. Rick Voakes, who played in the first USDGC as well as 10 others, was also in favor of the course’s emphasis on shot placement.

“I think that was huge. I think that made the sport more credible and a more professional kind of sport,” said Voakes.

The 1999 USDGC was also the first time a disc golf event used yellow rope as a marker for artificial OB. Duvall remembered it being placed on holes 12, 13, and possibly 18 that year.

“The rope at that time seemed like a very far-fetched idea, but it made sense. With some of those open holes, it added some character,” said Andy Greene, who was on the USDGC Organizing Committee.

Hole 17’s green was guarded by hay bales, which still happens today. But having to land your tee shot in the island green or be forced to re-tee was something new. That year the PDGA granted a rule variance allowing players to retee if their shot did not land in bounds, according to Rothstein’s coverage of the 1999 USDGC.

Fast Forward two decades later, the Winthrop University Gold Course has seen dozens of changes and can still be considered at the pinnacle of disc golf design. Today the job of updating the course is in the hands of Harold’s son, Andrew, the 2018 USDGC Course Designer.

Andrew Duvall says his current approach to Winthrop Gold Design is to continue with his father’s vision of creating incredible disc golf for spectators and demanding, yet inspiring holes for the player. And that means re-evaluating each hole, each year, even the holes that are considered iconic.  “The focus is always creating the best course for the players. If we felt that the course played better backwards, I don’t think we’d be scared for a total redesign,” said Andrew Duvall. Hole 9 is a good example of that this year. It was completely redesigned for 2018.

What’s in store for the future?

Along with keeping with his father’s vision, Andrew Duvall said he and the rest of USDGC staff will have to remain flexible for future changes to the Winthrop property.

Over the years, the course has had to adapt to the addition of such things as tennis courts, a wetlands research area, baseball field improvements and other facility changes. With the USDGC being a guest on Winthrop University property, USDGC officials must expect more changes with a growing university set in a thriving metropolitan area, said Andrew Duvall.

For top pros, in the circle putting has practically become a given, which ultimately isn’t interesting for the player or the spectator, according to Andrew Duvall. Last year, five, 6-foot wooden pillars were installed on the right side of Hole 2’s green, guarding the target. And, although that move was controversial, the putt from that side was no longer a guarantee. 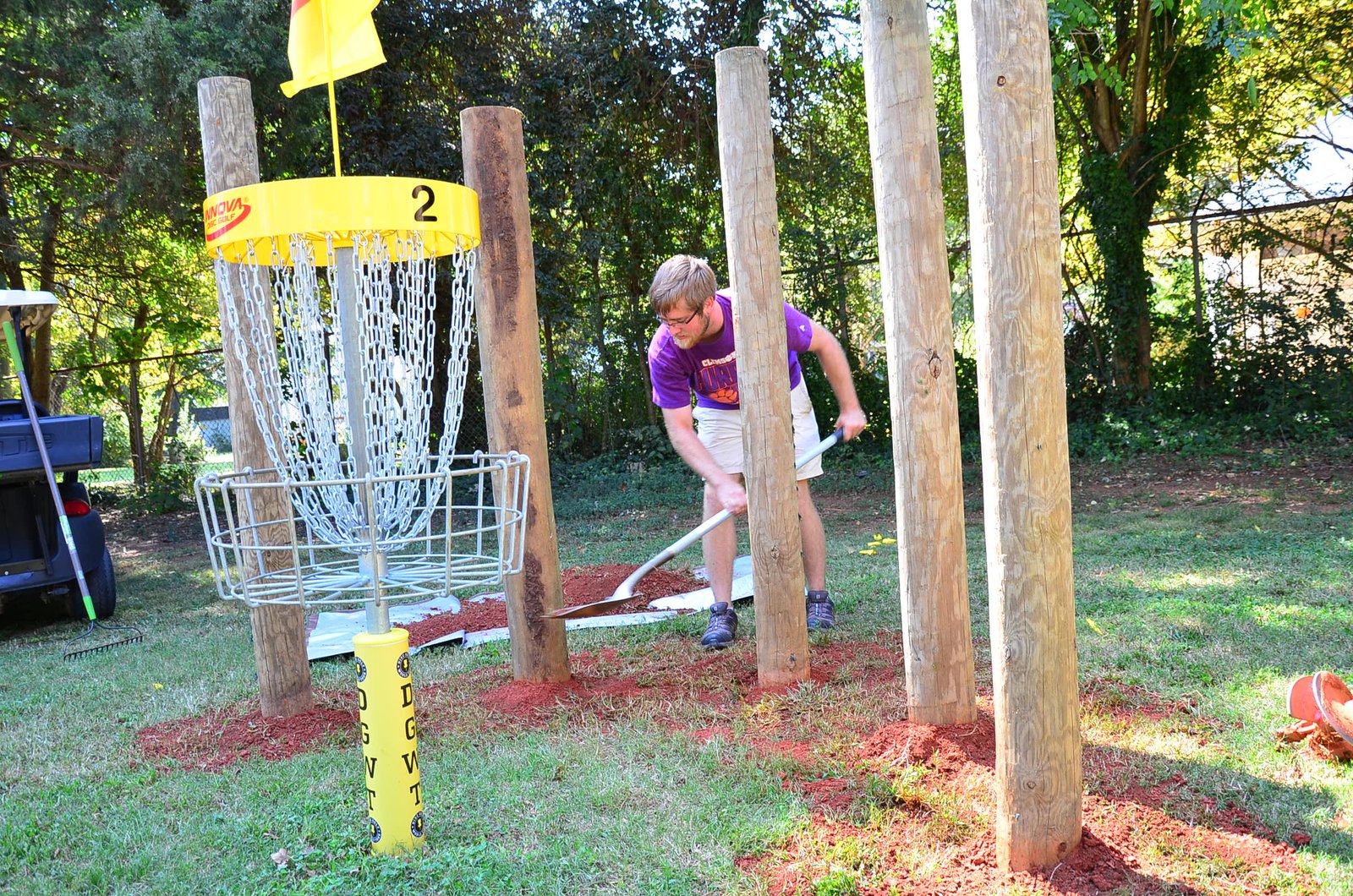 The approach to Hole 2’s green was also made more difficult with the pillars presence. Now the player had to land on the correct side of the pillars or risk a contested putt.

“I think the posts work as exactly as they should. They make putting more interesting, but they make approaching the green more valuable as well,” said Andrew Duvall.

He said they will look to create more putting challenges in the future. In the end, it’s about testing the top disc golfers and their abilities while wow'ing the crowd at the same time, said Andrew Duvall. And he feels pretty good at the kind of must-see disc golf they’ve created so far.