Just by watching long-time volunteer Nathan Lane you can tell right away what the USDGC spirit is all about. Because at any given moment you’ll see Lane lending a hand and as he's doing so there's a smile on his face.

During the Opening Ceremonies Tuesday night, Lane, serving in his 13th USDGC, was awarded the Golden Rake award for outstanding volunteer service.

“He’s just always been the same super-nice guy no matter what’s going on in his life,” said USDGC Staffer Henry Childres, who’s known Lane for 14 years. “I can’t remember a year he hasn’t been here and he’ll do whatever needs doing.” 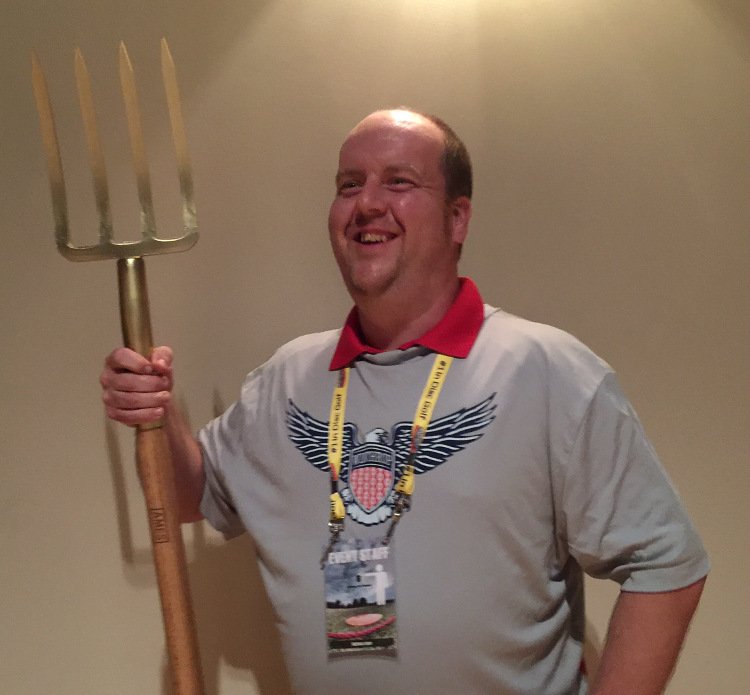 For the last five years or so, Lane’s post during the Championship has been spotting near the green on Hole 14, a hole that’s not the favorite of some spotters because the sun can be so merciless. In the past, he’s also spent time on Holes 10 and 13.

No matter the task, Lane helps out

USDGC Volunteer Coordinator Paul Bergey said that Lane is always one of the first volunteers appearing on the course and is liable to help in many ways including: readying golf carts, bringing out the pin flags, unfurling banners across the course, and furnishing water to the holes among other things.

“He’s never afraid to pick up a pitchfork to spread mulch or pick up some rope to mark OB,” said Bergey.
Bergey says he admires how willing Lane is to sacrifice his time. “And he continues to do that over and over each year. His impact has really added up,” said Bergey, adding that Lane’s can-do attitude and dedication is a perfect match for the USDGC.