In the annual USDGC Opening Ceremonies, the best disc golfers on the planet along with the event’s staff all gathered under one roof Tuesday evening to celebrate the USDGC’s kick-off and all of its noteworthy people. 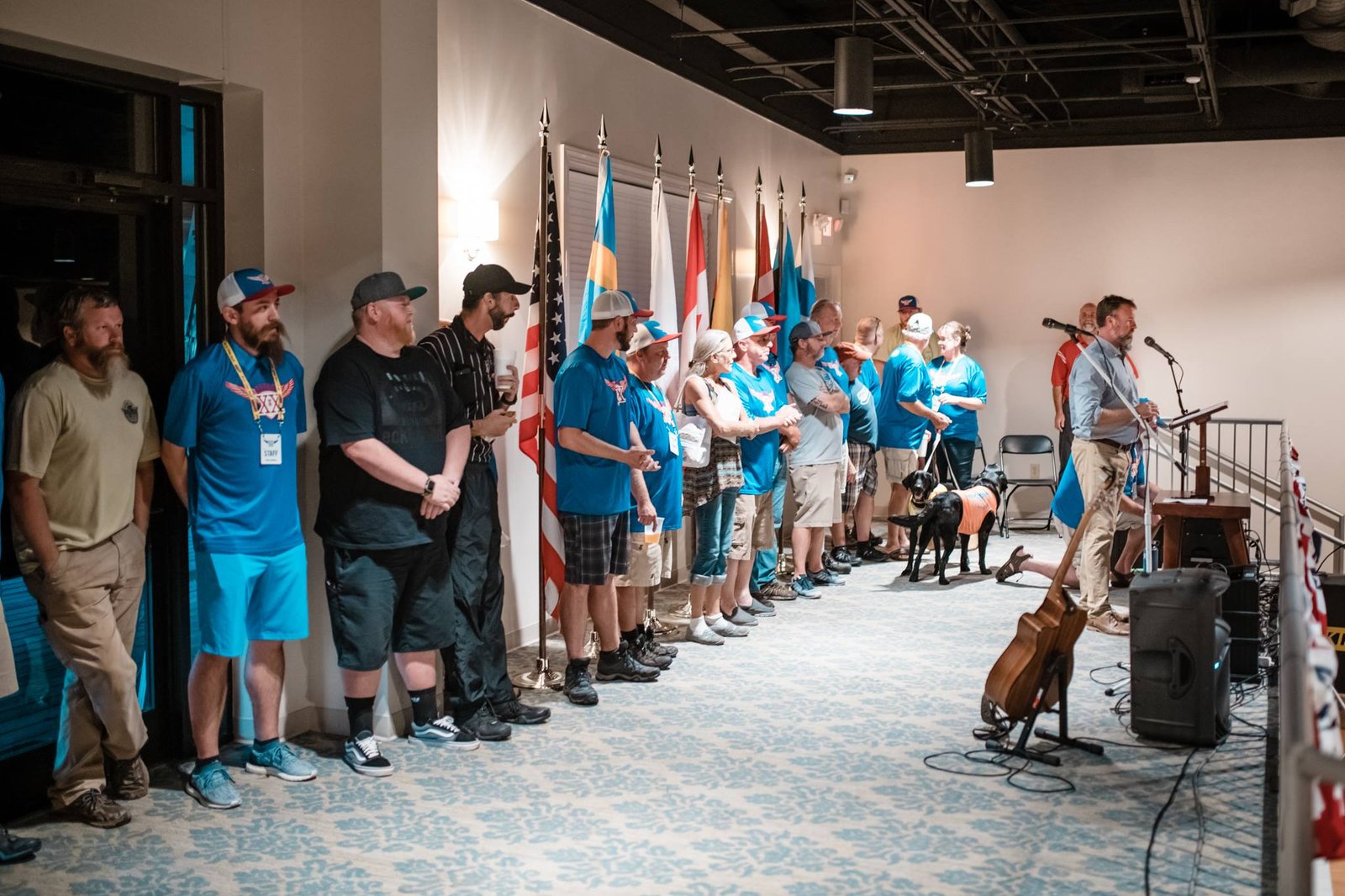 The USDGC’s secret sauce is the staff

After USDGC Chairman Harold Duvall welcomed the players, Event Director Jonathan Poole started things off by bringing out all of the event’s staff and volunteers onto the stage, who were received with a rousing ovation by players situated at dining tables. It’s an annual gesture where the players get to see the many people dedicated to serving them during the week-long event.

Kicking things off, was musician Zach Deputy, who performed an excellent and soulful version of the National Anthem. Deputy will be back to perform with the Mantras Thursday at 6pm behind the Pro Shop.

Winthrop University Athletic Director Ken Halpin then addressed the banquet hall and expressed how pleased the university was to host the U.S. Disc Golf Championship and how it was the university’s goal to make each player feel special during this national championship.

Not only was Halpin impressed with the Championship’s 20-year history, but he hoped to see another 20-year relationship with the event.

The promotion is a novel way for disc golf fans to donate to nonprofits Educational Disc Golf Experience (EDGE) and Throw Pink while following the USDGC. Fans that register for the promotion will pick a USDGC player to follow and donate money based on the number of birdies, eagles, and aces made by that player. To learn more go here:

One ring to rule them all

One of the most anticipated moments of the annual event is when the USDGC Champion’s Ring is presented to the prior year’s winner. After gathering all of the former champions on stage (except 2008 Champ Nate Doss, who was not in attendance), 2017 Champ Nate Sexton was awarded his ring. In his acceptance speech, Sexton said he was humbled to be in the company of all of the past champions. He added he didn’t know how long he would remain US Champ, but he would do his best to keep the title for as long as he could.

He said winning the USDGC has been the pinnacle of his disc golf career.

“I highly recommend being a US Champion. If you haven’t done it. Do it,” said Sexton humorously.

And the Golden Rake goes to …

The highest honor bestowed upon USDGC volunteer staff was then awarded to Marty Borucki, of White Lake, MI.

For the last 10 years, Borucki has been the man to take on any assignment be it shuttle cart driving, spreading mulch, laying out top or bottom rope, or whatever is needed.

A job he’s paid particular attention to the last few years has been perfecting the beach green of Hole 6. Each year the green’s sand has to be replenished and takes many Marty man hours to spread it out evenly.

During Borucki’s tenure, it hasn’t been uncommon to see him at Winthrop a week before the event, sweating away to get the course ready.

“I can’t tell you how much of a privilege it is to be a part of the greatest disc golf event in the world,” said Borucki during his acceptance speech.

Being a shuttle cart driver for several years, Borucki’s friendly face is often the first thing players see after a round. No matter if they broke the course record or played the worst round of their career, Borucki’s positive spirit behind the wheel let them know how important the are.

The annual announcing of the tee times concluded the event. As an homage to past Championship greatness, two of the event’s greatest champions, Ken Climo and Barry Schultz were grouped together for the 8:30 a.m. tee time. Though Climo’s hip injury will not allow him to play the entire round, he was expected to complete the hole.

Be sure to check out all of our staff photographer Eino Ansio pics from Tuesday.