The USDGC’s Opening Ceremonies are always more than just a meal with tee time announcements. And Tuesday night proved so with a special Disc Golf World Tour 2017 schedule announcement, plus the USDGC revealed a milestone in its total pro payout.

To start things off, motivational speaker Rashan Ali Thornton of nearby Ft. Mill, SC, spread the message that everyone in attendance had a champion within them. He asked players to regularly remind themselves and others of that fact, which would in turn foster great things. 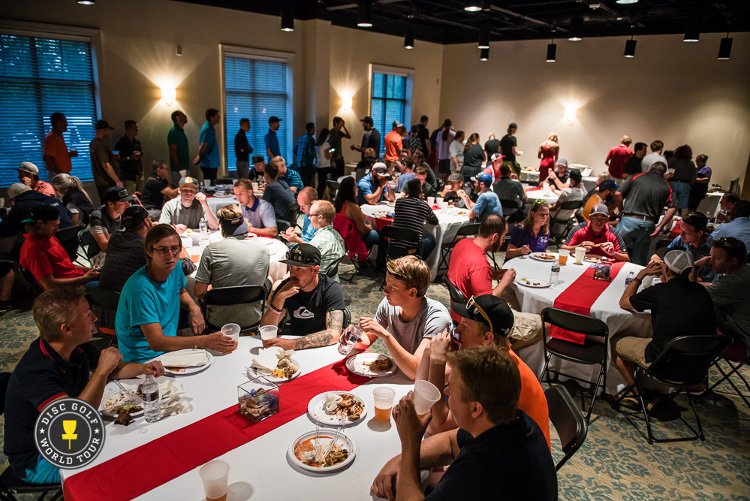 One of the bigger announcements of the night, was Disc Golf World Tour Director Jussi Meresmaa announcing the DGWT’s 2017 event schedule which includes: Aussie Open, Konopiště Open, European Open, plus the USDGC will once again be the finale. With one less event than 2016, Meresmaa said they’ll be focusing on quality rather than quantity.

A milestone for the Championship, USDGC Event Director Jonathan Poole mentioned that this year the USDGC will reach $1 million in pro total payout. Since its inception in 1999, the USDGC has had one of the richest tournament purses. What’s more, the Championship will also reach $300,000 in charitable giving this year.

McBeth Receives his 2015 US Champ Ring

Near the end of the night, Paul McBeth received his ring from his 2015 US Title during another USDGC special tradition where all of the former US Champions present are assembled on stage.

Poole also made a special point to recognize the PDGA for its long standing support of the USDGC. He added there are so many bright things ahead for the sport, and the PDGA is a big part of that.