USDGC is Going on the Road

From the first USDGC Qualifier early in the season to the last one in early fall, The Road to the Championship is going to be a journey filled with incredible performances, premier events, and for many that qualify, the realization of a disc golf dream. Starting in 2020, USDGC representatives will be on hand at nearly every qualifying event (including three international qualifiers) to personally award the qualifying invitations to players.

The USDGC would like to acknowledge that E.R.I.C. (Early Recognition Is Critical) - Flying Disc Week has graciously agreed to join us as the Official Partner and Presenter of The Road to the Championship for the 2020 season.

Qualifying for the USDGC is a feat in and of itself and USDGC officials believe it’s time to show these players in-person the significance of their achievement.

Chris Shotwell and Kevin McCoy represent the USDGC at qualifying events and each of them knows what it’s like to qualify.

“From before the tournament starts, you’re reviewing every scenario to get in. You’re doing the math. Who do I have to beat to get that spot? It’s a big deal for most players,” said Shotwell, who qualified twice for the USDGC.

Five spots to the Championship are up for grabs at each USDGC Qualifier including the first qualifier, the recent Las Vegas Challenge (Feb 20-23). Wasting no time, were Garrett Gurthie, Ricky Wysocki, Tristan Tanner, Simon Lizotte, and Kevin Jones, who all earned invites there. Gurthie talks about his Round 2 performance, which included an ace, in the following video.

Who’s Next to Qualify?

Shotwell said another bonus to having USDGC representatives on hand will be to add some Major event atmosphere to the qualifier event. At the end of each one, Shotwell or McCoy will make a presentation announcing the players earning USDGC invites.

McCoy, who has qualified nine times for the Championship has had this honor before. “It's especially rewarding handing an invitation letter to a USDGC rookie, seeing the absolute joy of accomplishment,” said McCoy, whose best USDGC finish was 3rd in 2005.

UDisc Live  is also going on the road with the USDGC. They plan on covering 17 USDGC Qualifiers, possibly more. For each qualifier, UDisc has created a special toggle so users can see who is in position (in real-time) to earn one of the five USDGC invites up for grabs. 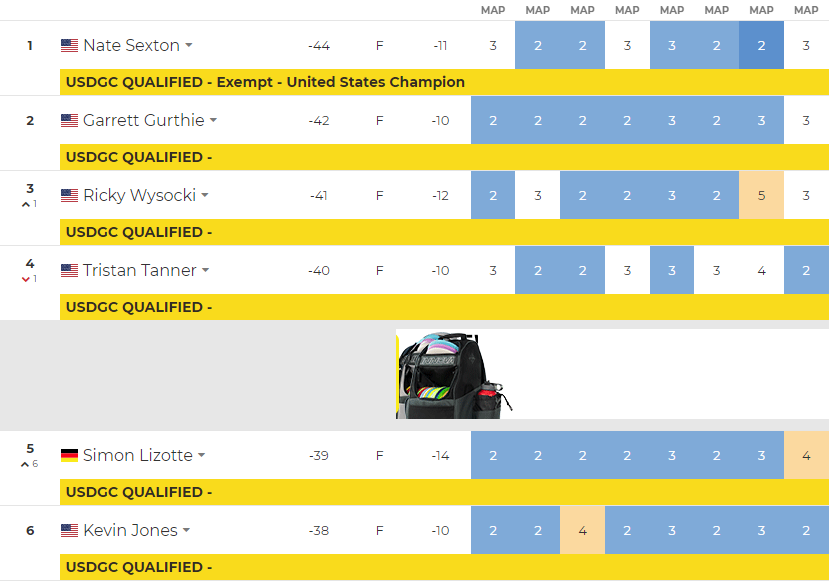 At many of the qualifiers, expect to also see the Innova RV on hand and with it special USDGC merchandise to fundraise for the Championship.

All Roads Lead to Winthrop Arena

The Music City Open in Nashville, TN, (Sept. 25-27) is the final stop on The Road to the Championship. Until then, be prepared for athletes laying it all on the line to secure their spot at each qualifier.

Look for updates regarding The Road to the Championship from our USDGC crew through Innova social media.