With three players tied for the last spot at 64 (-2) late into Monday Qualifying action and many expecting another playoff like last year, Dylan Horst eliminated any talk of that when he turned in a 61 (-5) on the very last card.

After turning in a 67 (+1), Horst, then saddled up in time to make the very last group to tee off at 3 pm. It was a good thing because the second round did the trick and now he’s off and running for his first USDGC.

No journey too far for Monday Qualifying

Grady, of Augusta, ME, was hoping his one round of 62, shot earlier in the day, would be enough. To find out, he had the unenviable task of waiting 5 hours to see if it held up. Grady, who finished 55th in 2013,   admitted he was a little worried, but everyone he talked to reassured him that 62 had usually made it in the past. The score held up, making that 17-hour car ride totally worth it.

Another qualifier traveled along way as well to secure a spot, roughly 2,300-miles. Max Nichols of San Diego, said there was no doubt he was making the long trip. “I come up here every year whether I’m qualified or not,” said Nichols, adding that if he’s not qualified he’s playing on Monday.

With pleasant weather and minimal to moderate winds, Monday Qualifying saw a big turnout of 100 competitors. The nice weather in the upper 70’s was a welcome change for Nichols, who last tried to qualify on Monday in 2015, when he battled for the last spot in a playoff in the rain, but came up short.

Nichols, who finished 33rd last year, said he approached the round looking for anything under par and he did that and more by racking up seven birdies and only getting one bogey. His best USDGC finish came in 2013 when he finished tied for 4th, only two strokes shy of Steve Brinster’s winning score.

Greeting the competitors at the first tee, was a special message by Defending US Champ Jeremy Koling displayed near the first tee.

On a dry erase board, propped up by an easel, Koling had drawn a friendly koala bear clutching a tree near Hole 1 with the message “USDGC 2017 Happy Koala-fying. Good Luck”. Koling said he was hanging out with qualifier Eric Oakley and Nate Perkins (who nearly qualified) a few days ago and the koala-fying pun popped in his head. “ … And I ran with it,” said Koling. 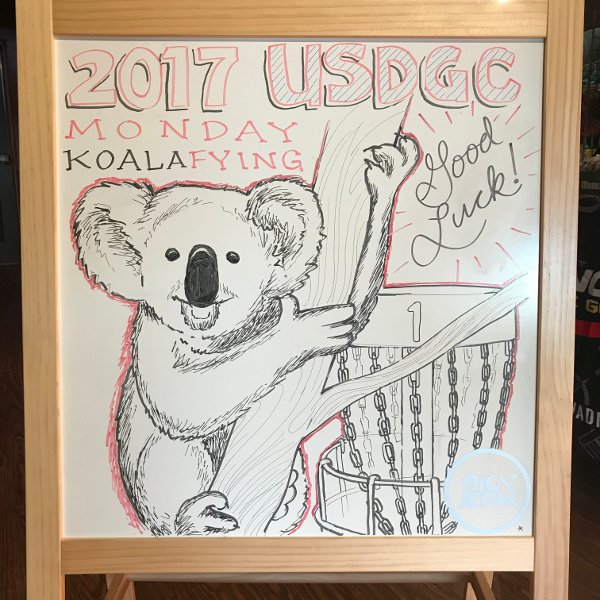 Ace Alert: Nate Perkins, who was among those who were tied at 64 shot an ace on Hole 17.