The great feast before the battle as it’s known to some. Tuesday evening means it’s time for the annual USDGC Player’s Meeting, where players and staff meet to eat, fellowship, and get rallied up for the big week. 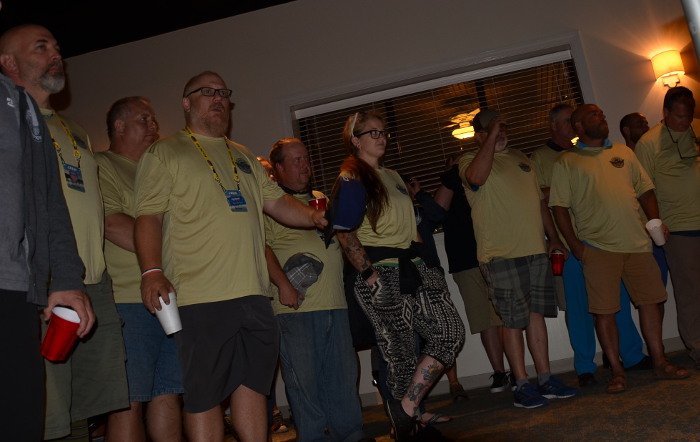 USDGC Event Director Jonathan Poole, acting as the evening’s host, then introduced the dozens of event staff in attendance wearing their new gold staff jerseys. He said there are many things that make the Championship go, but “Nothing is more vital than the people behind it.”

Players and staff were welcomed by Winthrop University Events Director Neal Miller, who told everyone he hoped to see the university partner with the Championship for many more years to come.

Poole then gave some exciting news of a $1,000 ace bounty placed on Hole 3 by Jason Tyra of Grass Valley, CA. “It might be more of an accident if you hit it, but it is out there for the taking,” said Poole.

Following that was one of the most special points of the Players Meeting when all of the past champions are gathered on stage and the previous year’s winner is awarded their ring. What a lot of people don’t know is that we make the winner wait a hole year before getting their ring, said Poole.

2016 US Champ Jeremy Koling was clearly moved to receive the ring. “This is the prettiest thing I’ve ever seen,” said Koling as he accepted the ring. After growing up in the Charlotte area and having the USDGC practically in his backyard, he hoped one day to be a part of it. And he looked up to those like Ken Climo, Barry Schultz, and Nate Doss, who were winning it. “Those guys were the national and international pillars of disc golf,” said Koling.

“It’s insane how much this means to me,” Koling later said as he thanked friends and family and the greater disc golf community for their support over the years. 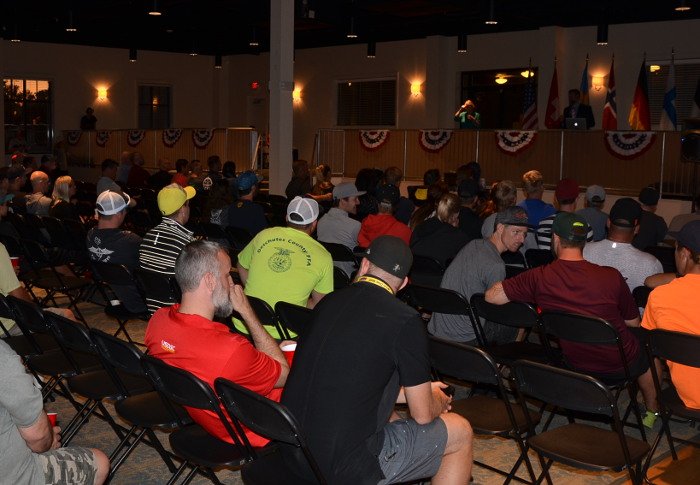 Poole then transitioned to the Golden Rake Award by commenting that even though disc golf may not be embraced yet by the TV networks and the mainstream, in a way the sport has already arrived because of how much community support and dedication is out there for disc golf. That dedication is seen every year at the USDGC through its volunteers.

All of the past Golden Rake Award winners were then assembled on stage. Each year the award is given to an outstanding USDGC volunteer. Learn more about the winner Tom Usselman here. “He embodies the award like no other,” said Poole.

To cap off the event like every year, was the announcing of the tee times by USDGC Official Starter Andy Greene, who has announced every player’s name since the tournament began in 1999.