Four years ago when USDGC volunteer Tom Usselman was seriously ill he scheduled his radiation therapy early in the morning so that he could still help prep the course for the USDGC at 8 a.m.

Hearing that story, it’s no wonder he was chosen to receive the USDGC’s Golden Rake Award at the Player’s Meeting on Tuesday evening. Each year the award is given to an outstanding volunteer.

Early to come, last to leave

This year marks Usselman’s 8th year volunteering. And every year Usselman has been involved he’s been one of the first volunteers to arrive for prep work in September (often 2 weeks prior to the Championship or earlier) and one of the last to leave when it’s time to tear everything down. 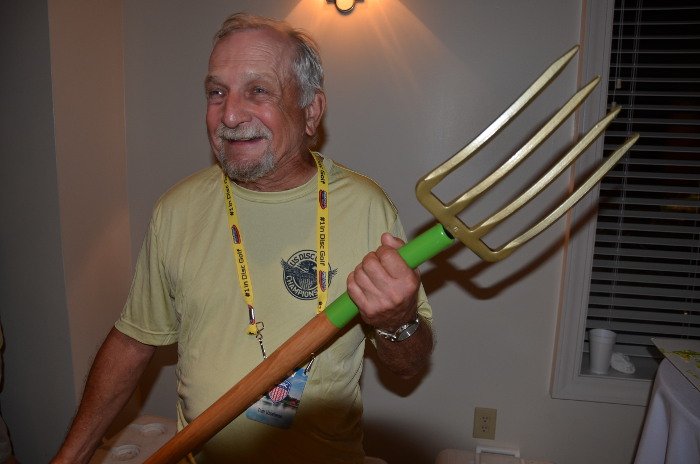 You can find Usselman, who has since fully recovered after his colon surgery, anywhere on the course. Nothing’s beneath him. He’ll put up banners, spread mulch, help erect the unwieldy red and white tent, and of course assist with the OB. Not bad at all for a 70-year-old man.

“He’s the bottom string specialist. That’s what I call him,” said USDGC volunteer staff coordinator Paul Bergey, about the time-consuming task of pinning the bottom layer of OB (yellow twine) to the ground.

Then once the event happens Hole 9 is his home, which he’s spotted each year he’s been here. Usselman said he appreciated the recognition. “It means a lot being a part of the disc golf family here,” said Usselman, of Charlotte, as he greeted well-wishers after the banquet.

What makes him a good volunteer is his loyalty Bergey added. Former Charlotte Disc Golf Club President and 2013 Golden Rake Award Winner Sam Nicholson agreed with that assessment. He’s seen Usselman time and time again assist on Charlotte disc golf courses and it doesn’t surprise him he does the same thing for the USDGC.

“His retirement has been great for Charlotte disc golf and the USDGC. Practically every time the club has had any workday or the USDGC has had course prep since Tom moved to town, he has been there,” said Nicholson.

“He is focused, task driven, passionate about disc golf and is excited about making every course in Charlotte and the Winthrop Gold Course the best it can be,” said Nicholson.