(Written by Robert Leonard, this story was originally published in the winter 2015 edition of Discgolfer magazine)

“It’s the hardest hole in disc golf,” Terry Gallops stated after taking a 9 in last year’s USDGC. “That hole cost me cash.” 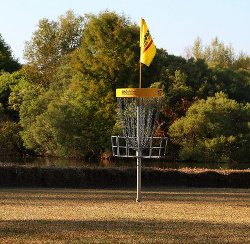 When you read a statement and see a number like that you might think he is referring to the monstrous lake bordering hole 5, 888, or maybe the deceptively tricky hole 11. Few would believe he was talking about the second-shortest hole on the course, the par-three hole 17.

At just 249 feet, downhill, and relatively wide open, it really makes no sense why Gallops and countless others of the world’s elite would say this. Logic and the eye test don’t support Gallops’s claim but the numbers and the endless stories of rounds and tournaments ruined surely do.

In the Open flight last year, only 16 players finished the week under par on hole 17 and the hole scored a cumulative total of 174 over par for a 3.68 scoring average. Its victims ranged from such relatively unknowns as Matt Bell, who took a 15, to the defending champion Steve Brinster whose chances of repeating were gone after scoring a 12.

“Disbelief,” a disappointed Brinster stated about his 12. “If I had thrown one better shot, I would have saved myself nine strokes.”

Brinster’s frustration with hole 17 can be credited to one man, course designer Harold Duvall.

“The hole rewards commitment and discipline,” Duvall emphasized. “Hole 17 is also designed to create tension and drama, both for the players and the ever-growing USDGC audience.”

If anyone can attest to that tension and drama on 17, it’s Ken Rollins. Rollins, a USDGC volunteer, has spotted on 17 for five years and has the best seat in the house to watch rounds destroyed with a simple lift of his red flag.

“At least one competitor stands out each year,” Rollins stated.  “It’s that one person who continually throws a screaming forehand. In most cases they card anything from 13 to 22.”

So what makes this hole so tough? Why do the best players in the world who seemingly can birdie holes on command suddenly struggle on a shot that almost any casual player can throw? Why don’t they just simply lay up and then throw onto the green?

2005 USDGC Champion David Feldberg thinks that it’s an ego problem from his competitors.

“Who cares about your ego?” Feldberg explained when asked why he is one of the few players who lays up. “It is a game of numbers and four pars is always better than two birdies a par and a triple bogey.”

“The layup is essential from an emotional perspective,” Duvall explained. “Most players long for the chance to be heroic. You can't choose to be heroic if there is no choice to play it safe.”

If you have the strategy that laying up is the best option, you have plenty of time to change your mind. The walk from 16’s pin to 17’s tee is 1,068 feet, the longest of any at Winthrop. This unusually long walk gives competitors ample time to not only think about the hole, but battle their game plan. It also “helps to build emotional tension” according to Duvall. Combine the amount of time the walk takes with the pressure of winning a Major and you run into countless examples of 17 deciding who holds the crystal not more than 30 minutes later.

In 2010, Will Schusterick was trying to hold off defending champion Nikko Locastro. With a two-throw lead on 17, Schusterick decided to stick to his strategy and laid up. He carded a three and won.

Two years later, Schusterick was up two on Ricky Wysocki and this time, went for the green.

“From 2010 to 2012 I learned to throw a controlled fan grip off the tee,” Schusterick answered when asked why his strategy changed. “It is a necessity on that shot.”

Schusterick was able to hit the green and claimed his second USDGC title.

After two years of success on 17, Schusterick’s luck would change in 2013. Tied for the lead with Steve Brinster heading to 17, Schusterick knew his plan was to go for the green with the same fan-grip approach. Two slightly delayed releases and a perfect drive by Brinster a minute later resulted in a four-throw swing and a victory for Steve Brinster.

“I was very surprised that he missed the green twice,” Brinster recalled. “I kept saying to myself this was not the time to lose focus.”

“No lead is safe until 17 is complete,” Duvall said when referring to issues like the one Schusterick had. “It presents both the chance to pass and the chance to be passed.”

2014’s edition of 17’s problems this time was presented to JohnE McCray. With a four-throw lead heading to hole 17, McCray missed the green three times, made 9 and eventually lost in a three-way playoff to Paul McBeth and the eventual champion Will Schusterick.

When asked about why he didn’t lay up, McCray responded that it never crossed his mind.

“I never lay up,” McCray explained. “Of course I wanted to win but the circumstances only allow one person to win.”

McCray’s decision shocked viewers on DiscGolfPlanetTV, created an uproar on social media, and left everyone questioning why McCray chose the option that he did. It seemed the only people not questioning him were his fellow competitors.

“John is one of the best putter throwers in the world in my opinion,” Schusterick explained. “His confidence levels were outside this world the whole round and that's what it takes to land it in-bounds on 17.”

“John never once changed his game plan and that's exactly how I would have done it,” Paul McBeth explained on FaceBook.

“Never change your strategy during the tournament, no matter what,” 15-year USDGC veteran Brian Schweberger stated.

While hole 17 in 2014 will always be linked to McCray, it had other victims you probably didn’t hear about.

Pasi Koivu of Finland took an 8 in round one and finished the hole six over for the tournament. Four threes on the hole and your 2014 USDGC champion is Pasi Koivu.

“I knew that players took big numbers on that hole,” USDGC rookie Koivu responded when asked about his decision to attack the green. “If I knew that getting a three every round on that hole would give me the title, I wouldn't have changed my decision to go for it.”

Koivu’s comments bring us right back where we started. If the players all know of the horror stories, why do players keep going for it? Why can’t players just lay up and “play the numbers game,” as Feldberg stated?

“Hole 17 is an ego challenge,” 10-time USDGC veteran Craig Gangloff stated. “Disc golfers don’t like to lay up. The golfer who can curb their ego and throw two accurate shots of 80 feet and 180 feet survives more frequently than those who can’t resist the allure of the deuce.”

Of course, even after this acknowledgement and sound advice, not even Gangloff is able to resist the possibility of that two: