Koling's win: Not the way he planned it, but he'll take it

Winning the USDGC didn’t exactly play out like Jeremy Koling had always envisioned, but in the end his name was on top of the final results thanks to his superb play, earning him his first US title and first pro major victory.

Due to safety concerns from the severe weather from Hurricane Matthew and major logistical problems that would not allow the event to be postponed until Sunday, event officials called off the tournament after three rounds, making the round 3 standings the final result, and Koling the 2016 US Disc Golf Champion. 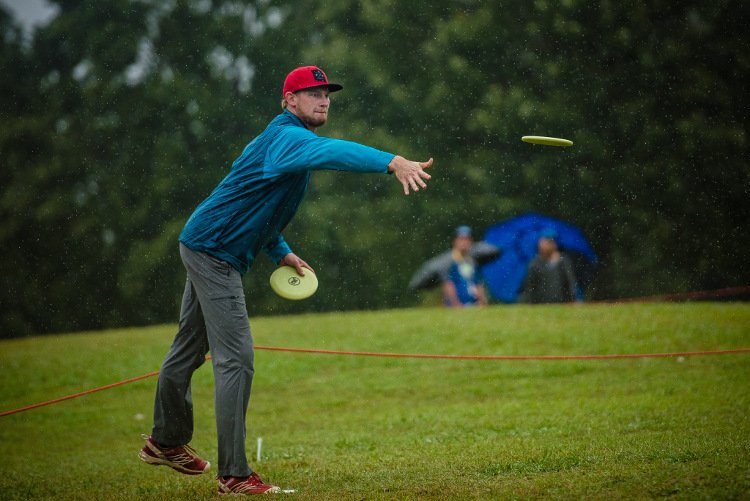 Koling gets the win after his 8th USDGC appearance

It’s a title that Koling, of Charlotte, has been searching for his entire pro career. Obtaining it now, even under the unusual circumstances, is Koling’s biggest achievement. And he’s proud of it.

Being a “major champion is something that I will have for the rest of my life and that means a lot to me,” said Koling, whose best USDGC finish until now was a tie for 10th last year. Still, Koling was hoping to claim the title the traditional way and he feels for the competitors like Nikko Locastro (second) and Ricky Wysocki (third) who were within striking distance.

“The competitor in me wanted to win it in four rounds,” said Koling, adding that he wanted to prove that he could last mentally and physically for all four rounds. Plus, he was excited about a final round lead card featuring three players: Wysocki, Michael Johansen, and himself, who all live within forty minutes of the Winthrop Gold Course.

Friday evening, the plan was for competitors to play an amended 17-hole layout, however when Saturday came and with it more bad weather, the final round was first delayed by an hour, then postponed for Sunday, then finally canceled. It was a lot to take in for everyone.

“There was so much speculation on what was going to happen today (Saturday) with the weather. The staff was working their best to make their decision. I think everyone wanted to play the fourth round, but it just wasn’t going to be in the cards,” said Koling.

Koling had the performance of his life

The three rounds that Koling did produce, though, were top notch. The first round rated 1050, followed by two 1062 rated rounds, the last one in wet, blustery conditions. The word often used to describe Koling’s play this week was “solid.” And, it was likely that Koling would’ve continued that play if a fourth round did happen.

Prior to Saturday, the way Koling had always pictured winning the USDGC was by marching up Hole 18’s fairway at the conclusion of round 4 surrounded by his disc golf friends and fans and then giving way to pure joy after dropping in his final putt. Sure, it didn’t happen like that, but Koling still played remarkably, every bit a US Champion.

Koling still gets his Hole 18 moment

Not to be without a Hole 18 celebration which many US Champs have had before him, Koling and friends engineered his own Hole 18 moment not long after he was crowned US Champ on Saturday during a break in the weather. Check it out here:

While the tournament may have been cut short due to #hurricanematthew, it was not short on festivities. With no actual winning putt, Jeremy Koling's friends decided to stage one for the freshly crowned champion. Stay tuned for more photos, videos and stories to come! #DGWT #USDGC2016 #USDGC #discgolf