Matt Dollar’s first time at Monday Qualifying sure was a nail bitter. But after two 2 clutch putts and some help from a hay bale, Dollar emerged from a two-hole playoff to secure the last spot for Monday Qualifying.
Others making the grade during the pleasant Winthrop conditions were: Isaac Robinson 62 (-5), Ezra Robinson 63 (-4), Max Nichols 64 (-3), Bartosz Kowalewski, 65 (-2). Dollar and Dustin Perry were tied at 66 (-1).

It didn’t look good for Dollar after his overhand drive on the first playoff hole hit midway down the hole and left him with a tricky approach to the green. Perry and his forehand drive landed safely, but without an easy birdie putt.

Dollar then managed an approach near the circle’s edge, and Perry seeing that Dollar was still a tough putt away, laid up for his par. Needing a clutch putt to extend the playoff, Dollar nailed his par save and the two men walked to Hole 17. Both men successfully landed forehand drives into the island, however Dollar’s shot just barely made it after hitting a hay bale and bouncing into the green.
“I threw it and I was like that’s not gonna make it,” Dollar said after the playoff.

Perry missed his outside-the-circle putt, and Dollar, who had landed near the circle, canned his putt, allowing him to play in his 7th USDGC.

A playoff may not have been necessary for Dollar. He said he shot a 66 (-1) earlier in the day and was on pace for a (-3) during his third and final attempt, but an errant putt for birdie on the last hole brought him right back to another (-1) and still on the cusp of elimination.

Mike Robinson, of Snellville, GA, has traveled to the USDGC for Monday Qualifying several times over the years, but never had a top score. This year, he still didn’t make the cut, but his two sons, Isaac and Ezra did. Older brother Isaac, 17, submitted his 62 from his first attempt and led all qualifiers.
“The fact that I didn’t go OB at all. That was probably the biggest thing,” said Isaac explaining the key to his round’s success. 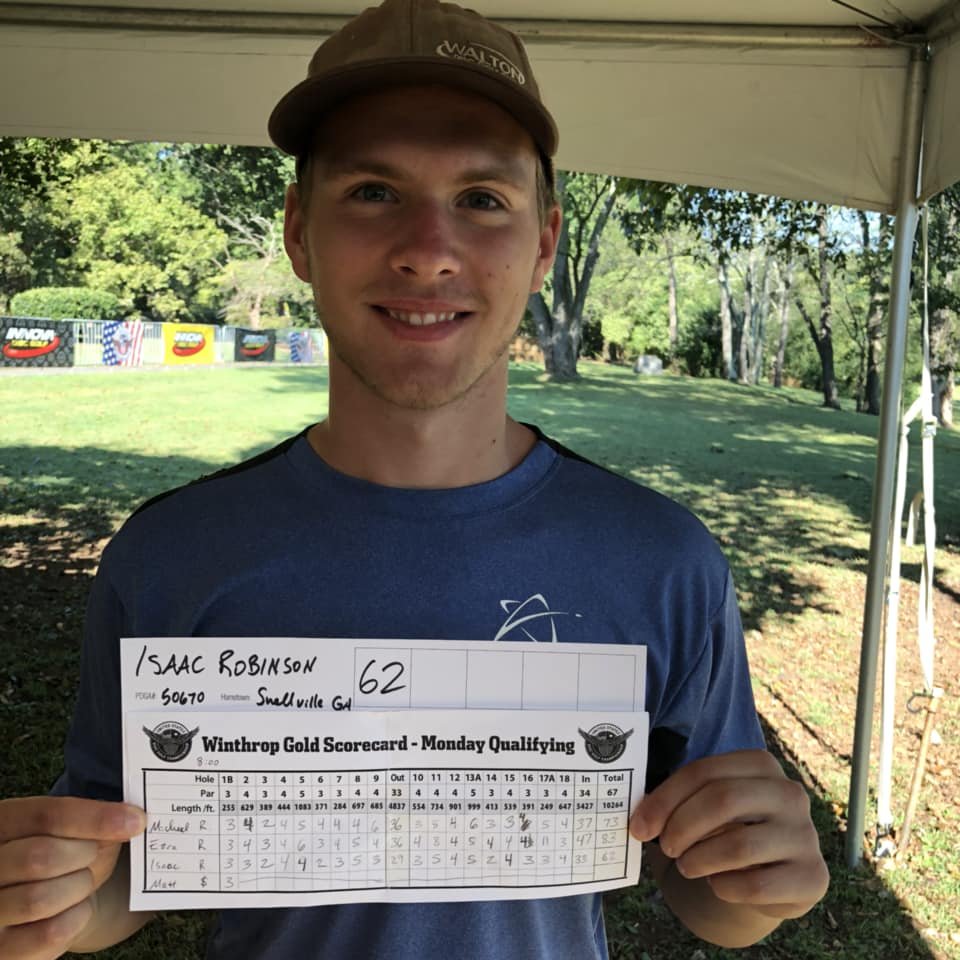 After not really feeling it during his first attempt, Isaac’s brother Ezra, 16, found his stride during his second attempt. He said the first attempt, around 8 a.m., was like his practice round, so the next time “I knew how to execute the shots and where to put them.”
Isaac, who caddied for his younger brother during the second go round, was excited to see him do well, but was secretly pleased his brother made a bogey on the last hole, so that he could have the family course record at Winthrop.

Their father Mike was excited for both his sons to get in, but especially glad for Isaac since he will be going to college soon, and may not have many more opportunities like this. While playing with his boys today, even though his game wasn’t firing on all cylinders, he said “I was just having fun watching them.”

Be sure to visit the USDGC Facebook page for all of our staff photographer Eino Ansio awesome shots of the day’s action.