The Tuesday before the USDGC means practice for the players and preparation for the staff during the day, but at night the annual Opening Ceremony brings the two parties together for food, tradition, and of course the following day’s tee times.

Though many of the same traditions were continued in this longstanding Championship event, it also had a sense of newness about it. That certainly included the new location at the Rock Hill Sports Complex, but it also included the new staff faces speaking on the stage and fresh music from Innova Ambassador DJ Hek Yeh, who kept things jamming throughout the evening.

After Hek Yeh’s rousing musical introduction, Event Director Jonathan Poole welcomed all to the ceremony. Right off the bat, he wanted to make clear this wasn’t your typical player’s meeting.

“This is not a meeting. We want this to be fun,” said Poole.

Performing in the ‘Winthrop Arena’

USDGC Chairman Harold Duvall, another annual figure at the ceremony spoke of performing in the “Winthrop Arena” which can come in the role as a USDGC competitor or a USDGC staff member refilling water coolers, scoring groups, or whatever duty they’re tasked with. In either case, you’re putting yourself out there for a cause.

“What we’re going to do this week is to show the world what it’s like to be in the arena,” said Duvall.

Poole reinforced the important role staff play at the USDGC by bringing all of the staff to the front. It’s an annual tradition that shows players just how many people, many volunteers, are working to make the event possible.

“We have more people working the event then are playing in the event,” said Poole. 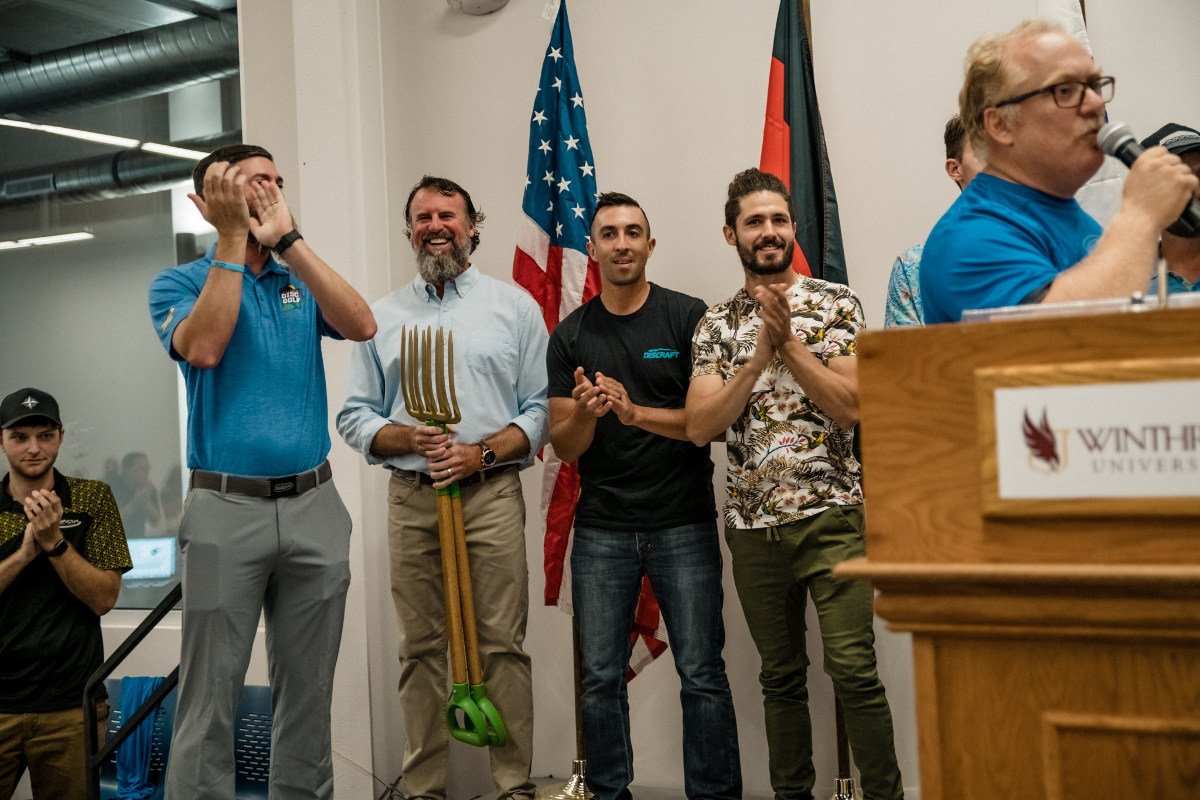 Another tradition is recognizing the USDGC’s past champions. Once all are assembled on the stage it’s always quite a sight to behold. Nine of the 10 past Open champs were in attendance (2008 Champ Nate Doss was not present). 2018 winner Paul McBeth received his Championship ring and expressed his gratitude to Innova and the staff for continuing to make the USDGC possible.

Golden Rake Goes to the Singletons

Along with honoring the previous year’s champ, the ceremony also honors its most dedicated volunteers. Each year the Golden Rake Award is given to an outstanding volunteer/volunteers. Since there have been so many worthy volunteers over the years the award has become more of a USDGC Volunteer Hall of Fame induction.

“This is my family – these past Golden Rake winners,” USDGC Volunteer Staff Coordinator Paul Bergey said before he announced this year’s recipient.

This year Charlotte residents Doug and Diana Singleton won the award. Diana has been volunteering for 21 years while Doug has done it for 20. 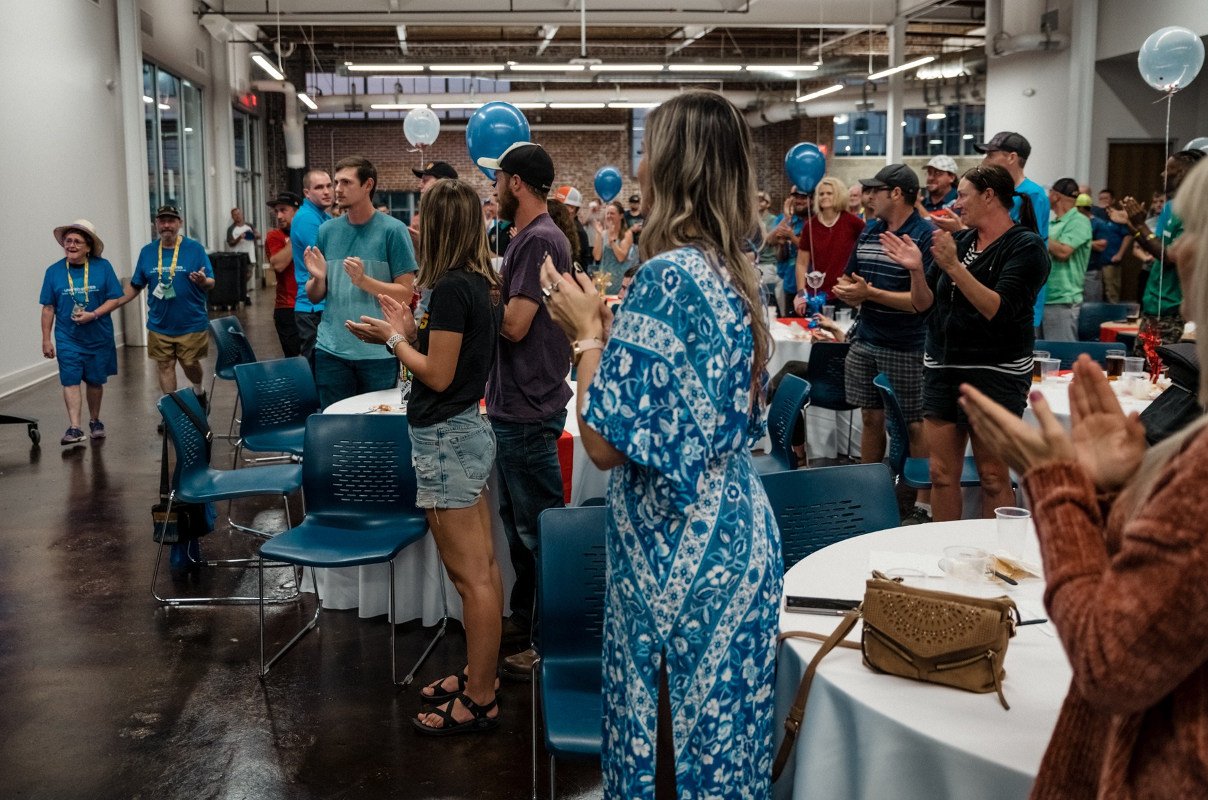 The Singletons have primarily done one thing at the Championship: drive shuttle carts. And they do it well, driving players to their tee times  and then back to their cars as well as shuttling the VIP ticket holders.

“Everything we do from cart driving to laying down bottom string is very important to making the USDGC happen,” Bergey said earlier.

Diana said her six-person shuttle has become known as the eagle wagon because of how often players shoot eagles after riding with her. The two, who have also been active with the Charlotte Disc Golf Club, first volunteered many years ago when USDGC staff asked the club for help. Doug is known as the “Roller King of the Queen City.”

Diana added that its been great to see disc golf grow so much.

“We’ve been playing disc golf before it was disc golf,” she said, referring to the days before targets when objects were used for pins. 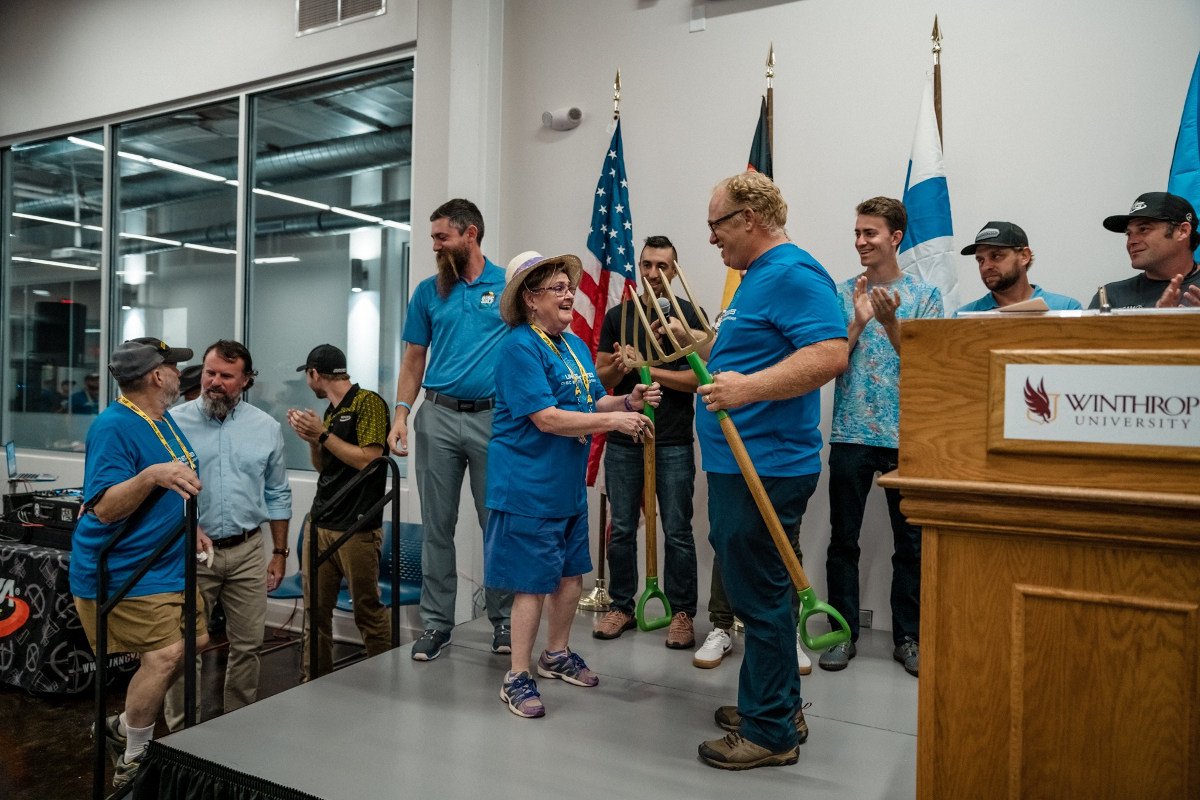 The night ended as it always does with the calling of the first round’s tee times. Usually it’s done by the official USDGC Starter Andy Greene, but with the night having several new changes, USDGC Staffer and Charlotte pro Josh Day took the reigns and did a fine job even with some of the extra fancy international names. He said he did some homework, looking up four to five pronunciations for some of the trickier ones. He was glad he did.