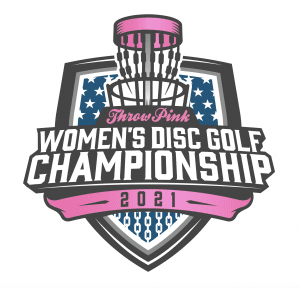 Championship Week at Winthrop in 2021 will include the inaugural Throw Pink Women’s Disc Golf Championship, an event that will run concurrently with the USDGC. Forty of the game’s best female athletes will return to the legendary Winthrop Arena Course, which has hosted 27 Major Championship events dating back to the Professional World Championships in 1997.

The Throw Pink Women’s Championship represents another chapter in the rich tournament history at Winthrop. The original Women’s National Championship was held at Winthrop in 1999, 2000, and again in 2001 after being renamed the United States Women’s Disc Golf Championship.

The WNC returned to Winthrop in 2020 after pandemic conditions forced the cancellation of the US Women’s Disc Golf Championship scheduled earlier in the year. The 2020 WNC and USDGC turned out to be the only two Majors of the 2020 season.

With the US Women’s Disc Golf Championship expected to return in 2021, tournament organizers agreed not to use the term “National” (Champion) to avoid any degree of confusion with the USWDGC Champion in the Open Women Division.

All current, dues-paid members in good standing of the Professional Disc Golf Association are eligible to qualify for the 2021 Throw Pink Women’s Women’s Disc Golf Championship). All competitors must have a current PDGA membership and must have passed the PDGA Official certification exam in order to compete. Those gaining eligibility should register for the event as quickly as possible.

Exempt from Qualifying and Special Invitations*

*In the circumstance that the winner above has already qualified, the invitation will extend down to the next athlete who has not previously qualified.

Note: Exempt athletes must register on or before August 31, 2021.

Two spots (FPO) will be available at each of the events listed below. Competitors who participate in qualifying events that are already eligible will be excluded from the qualifying process. In case of a tie for the final qualifying spot, the tournament director should hold a sudden-death playoff to determine the winner. If a playoff is not possible, the final spot should be awarded to the player with the lowest final-round score. Earned spots are not transferable.

All remaining spots will be filled on a tiered registration basis according to PDGA Rating. Registration is expected to begin on Wednesday, September 1, 2021.

Questions regarding this event should be directed to Sara Nicholson, Event Director. 803.366.5028 office / email

Install this USDGC on your iPhone

and then Add to Home Screen

Add the USDGC to your Homescreen!