Alex Geisinger of Lakeville, MN, doesn’t exactly call himself a touring disc golf pro. Touring the nation/world is a little tough with a full-time job and a nearly 3-year-old son. However, that hasn’t stopped the 23-year-old from making it to the lead card for Round 3 of the USDGC. 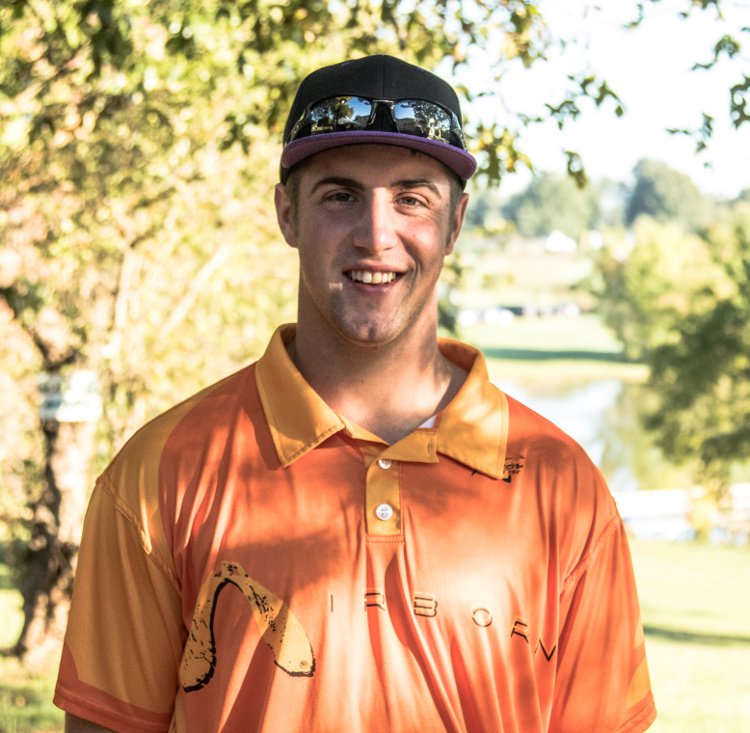 During the season, he makes it to whatever events he can. The USDGC is his ninth event this season. It would’ve been his eleventh, but he said he fractured his foot and was out for several weeks and had to miss a few events like the Ledgestone Insurance Open.

Although he’s not able to totally commit himself to disc golf, he’s glad he’s got an understanding workplace where his boss at a veterinarian supply company plays disc golf competitively and so do others there.

In fact, his company sent him a video message that featured the entire 31-employee company gathered together wishing him well. This would definitely give most disc golfers a warm feeling as they battle for the title. Check out the video here.

So far he’s having a great time at his first USDGC. Why wouldn’t he? He’s already become the 2015 US Distance Champ on Tuesday and he’s on the lead card for Round 3, only down by five strokes.

For Round 3, his goals are for zero OB penalties and to submit another score in the 50’s like he did in Round 2.

Before disc golf, Geisinger said he was mainly about fishing and playing video games. But when a buddy introduced him to the sport in 2012, he took to it and played regular ever since. A year later he turned pro.

Geisinger is known for his long arm and he proved it on Tuesday with a 739-foot throw to win the US Distance Competition. The self-taught distance specialist said when he first started playing, he and his buddies would often challenge one another in distance contests. And one day for him it just clicked, and pow! From there he decided to keep working on it to reach further and further.

He said his throw is a bit unorthodox compared to other long bombers because he doesn’t reach his arm as far back. For him, his power comes from his core area.

He’ll need that distance for several of the Winthrop holes on Friday. Follow Alex and his huge drives this afternoon as he competes for the US Title on the lead card.