Here’s a quick run-down of the noticeable changes. Keep in mind this is not a complete listing of changes or rules. For a hole-by-hole analysis of the ground rules, look to the 2018 Caddy Book Draft.

Like in years past, you’ll find both hazard (yellow rope) where players can choose to play from that lie with a one throw penalty or choose their previous lie with a similar penalty. And, there’s also standard OB (red rope). Each hole is unique, so look for hole specific OB rules in the Caddy Book.

This is by far the biggest alteration for 2018. First, the tee is now tucked into the woods right of last year’s location, but the big change is the fairway. Instead of one continuous, curvy fairway used last year, it is now divided into three segments: two fairway islands followed by an island green, which has been moved to a new location much further right than past years.

Those looking for par can puddle jump their way from one island to the next, while birdie seekers may opt to skip one island or another. However, if your disc doesn’t find the safe islands, you could find yourself in trouble in a hurry. OB is limited to previous lie or drop zone here.

2018 USDGC Course Designer Andrew Duvall said Hole 9 has always been their hole to conduct design experiments. Early on, the concept of the hole was two well placed shots to get access to the green for a birdie. Since then, there have been several variations utilizing different aspects of the hole, but this year Duvall said they’ve moved back to that mindset of emphasizing two accurate shots.

In a salute to the USDGC’s beginning, the straight-ahead, original Hole 1 pin placement will be used for Round 1. Last year’s pin location on the large tree stump will be used for the remaining rounds.

“As a hole itself there’s still a bit of challenge in that original location. Players will still get a par or a bogey knowing they should’ve gotten a birdie,” said Duvall, adding that it’s a good way to ease into the course to start the round.

“Not many events have the same storied history of the USDGC and obviously all of that has started on Hole 1,” said Duvall. 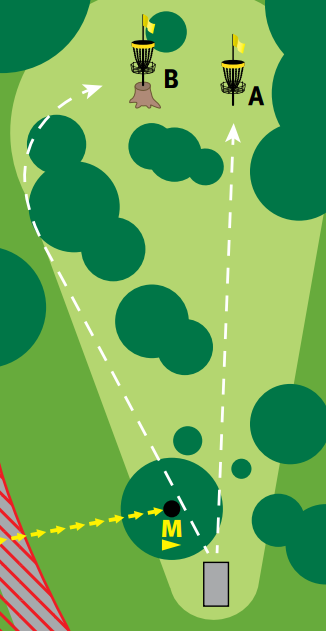 The feathers to the right of the tee are an integral part of the course. They can not be moved. If they are moved, they should be replaced.

The green is roughly the same size, however the left side OB line now extends further into the fairway, providing less room for safe bailouts in front of green.

Sinkhole relief: In the hazard area to the left of the green, a sinkhole has developed since last year's USDGC. Winthrop grounds crew have fenced off the area. Players may obtain relief from the sinkhole and the fenced area surrounding the sinkhole. Relief shall be on the Line of Play farther from the target in accordance with 803.02A. 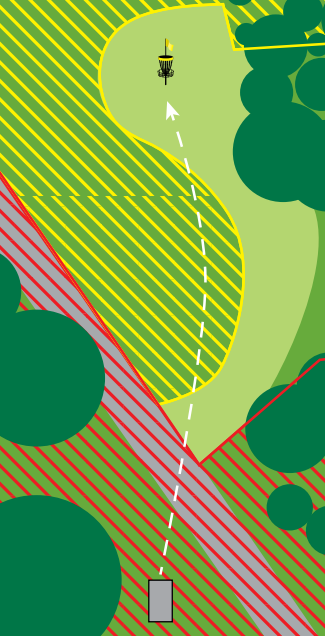 Only 1 pin position for 2018, the traditional one located near the peninsula’s edge. It’s another homage to the early USDGC’s and Duvall believes that pin placement makes it a better hole when it comes to the approach shot over the lake.

“Other pin positions aren’t the same adrenaline rush when you see your disc start to fall towards the water instead of landing and you’re not sure if it’s going to make it or not,” said Duvall.

Once the right-side OB begins (about 50 feet away from the tee), it runs uninterrupted for the length of the hole. This new OB line tightens up the fairway halfway up the hole and also replaces the bean-shaped OB area near the green from last year.

Last year with the hole utilizing hazard OB, some players were still able to save par even after errant shots. OB on the entire hole is now previous lie or drop zone with a stroke penalty. This change goes along with a recurring theme with this year’s course, which is to encourage players to make wise decisions based on their ability and then commit to it. If not, the course will be quite tough, said Duvall.

Hole 18: Fireworks at the End

For all four rounds, Hole 18’s pin will be in the familiar long position. Duvall said when it comes to last minute drama – the combination of Hole 17 followed by the demanding par 4 of Hole 18 – do a superb job. It’s exactly what you want for the tournament’s finale, he said.